The Islamic Republic of Iran — “Who Will Free Us from This Body of Death?”

The Islamic Republic of Iran, established in 1979 by the Ayatollah Khomeini, has never been a benign presence among the worldwide community of nations. 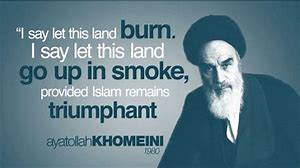 Why all this peddling of violence to extend its influence? What is Iran’s ultimate goal? And why has the West generally ignored Iran’s role as a destabilizing threat in the Middle East and South Asia? What made the Obama administration think that offering a carrot rather than a stick would cause Iran to become our best friend, or at least to eschew terror and war against others?

One look at the Constitution of the Islamic Republic of Iran is enough to expose the illusion that the mullahs and government functionaries are looking for peace and cooperation with others. In the preface to the Constitution, we find a paragraph heading: An Ideological Army. Here’s what it says:

In establishing and equipping the defense forces of the country, the focus shall be on maintaining ideology and faith as the foundation and the measure. Consequently, the Army of the Islamic Republic and the Islamic Pasdaran [Farsi for “Guards”] Revolutionary Corps are formed in accordance with the aforementioned objective. They will undertake the responsibility of not only guarding and protecting the borders, but also the weight of ideological mission, i.e. striving ( jehād) [sic] on the path of God and struggle on the path of expanding the sovereignty of the law of God in the world; in accordance with the Qur’anic verse: “Against them make ready your strength to the utmost of your power, including steeds of war, to strike terror into (the hearts of) the enemies, of Allah and your enemies” (8: 60).

In other words, the Iranian armed forces and the paramilitary force know in the West at the Islamic Revolutionary Guard Corps (IRGC) have the twofold mission of protecting the country from attack, and of bearing “the weight of the ideological mission,” which is the extension of Islam to the whole world, bringing every land under the “sovereignty” of Shari’a law. That they are deadly serious about this is seen in the fact that the Qur’an is quoted. It is their sworn religious duty to amass as much strength as they can muster in order to “strike terror” into the enemies of Allah (which of course will also be their enemies). And who are the enemies of Allah? All who refuse to bow to Islam — Shi’ite Islam, in this case.

It is for good reason that the US State Department first designated Iran as a state sponsor of terrorism on Jan. 19, 1984. It’s not as if Iran was trying to hide this fact — it is part and parcel of their nationalistic Islamic identity. The big question for the United States and indeed all the nations of the free world is: Why for almost forty years have we put up with an Islamic government committed to sowing terror in the world so as to extend the hegemony of repressive, anti-Western Shari’a law over more of the world’s population?

Where is the will of the free world to isolate this cancerous regime, to refuse all consular relations, to expel them as a pariah nation from the UN, to freeze all their assets and impose total trade embargos? At this point, with Iran’s economy in free fall, and with its population engaged in massive protests against the regime, it wouldn’t take much for the government to implode, and to be replaced by secular rule. That is what the vast majority of Iranians long for. It’s what they deserve. They, too, have been victims of the iron fist of the armies of the mullahs striking terror into their hearts to keep them in line.

Who will speak a word of sanity to the leaders of the free world so as to bring about the downfall of an evil government and the fresh air of freedom to a people long repressed? Forty years of malevolence and savagery is enough. Who will stand for the people of Iran? Who will stand for common decency? Who will stand against Islamic jihad and the imposition of Shari’a?

Many of us are waiting for political leaders worth their salt. It’s time to step forward!

3 Responses to The Islamic Republic of Iran — “Who Will Free Us from This Body of Death?”