Islamic Terrorism Will End — When Islam Has Conquered the World

One would think in light of this that Muslim armies would be rising up all over the world, trusting in the promises of Allah, to engage and defeat the forces of the infidel West, as well as the Communist world, the countries of Africa and Central/South America. After all, the Qur’an (Allah’s inerrant word) says:

In the next verse, Allah ratchets down the odds, recognizing that the Muslims are weak even with his angelic help:

Nevertheless, the Muslims are to fight under Muhammad and his generals, expecting victory even against stronger forces. And indeed, in the first major battle the Muslims fought against the unbelievers of Mecca, they were outnumbered at least two to one, and earned a convincing victory. Feeling that Allah was certainly on their side, they bought into the idea they were invincible. Until the next battle. The Meccans returned to Medina the next year better prepared, and inflicted serious losses on Muhammad’s army. Many believers were shaken by the fact that Allah had not given them victory, and wondered if Islam was a sham. But Allah soon revealed through his prophet that they had not succeeded for two reasons: 1) he was testing their resolve; and 2) among their ranks were numbers of hypocrites (whose hearts were not in fighting, and who refused to engage the enemy). Only if his army showed itself fully committed to him would he assure them victory.

This same perspective has given rise to modern Islamic “radicalism” or reformation (i.e., a return to the faithful beliefs and practices of the original Muslim community under Muhammad). When the last Caliphate fell into the dustbin of history (the Ottoman Empire, which was dismembered in 1924), some Muslim intellectuals began to ask why the non-Muslim world was now calling the shots, and the Muslim world lay supine and feeble before them. Their answer: we have drifted from our center; we are not truly committed to Allah and his prophet; but if we return to serious obedience, Allah will once again grant us supernatural help to regain our position of superiority in the world. From this mindset, the Muslim Brotherhood was founded in Egypt in 1928 and its movement spawned like-minded organizations around the Muslim world. The radical and terrorist organizations we see today are the fruit of this perspective.

So once again the world is faced with a resurgent Islam whose goal is to rule the human race. But Muslims by and large are not ignorant of the huge discrepancy between their relatively meager military resources and the vast destructive capabilities of the technologically advanced US armed forces together with its allies, not to mention atheistic China and Russia who also would swat down any frontal assaults by Muslim armies. Recognizing this, Muslim countries are biding their time, buying weaponry and technology, seeking as rapidly as possible to achieve parity with infidel superpowers.

The Islamic Republic of Iran is a perfect case in point. The fastest way to challenge Western power is to become a cardholder in the nuclear missile club, so Iran has worked hard in secret to develop that capability, while not neglecting their conventional armament upgrades. For example, yesterday the theocracy announced they were unveiling the “first 100% indigenously made” fighter jet, named “the Kowsar” (Kawthar, in Arabic). The name is significant, for it is the title of a short chapter of the Qur’an containing this promise from Allah:

Western military experts report that the Kowsar appears to be a remake of the USA’s F-5 fighter, numbers of which were shipped to Iran in the mid-1970s when Iran under the Shah was an ally. 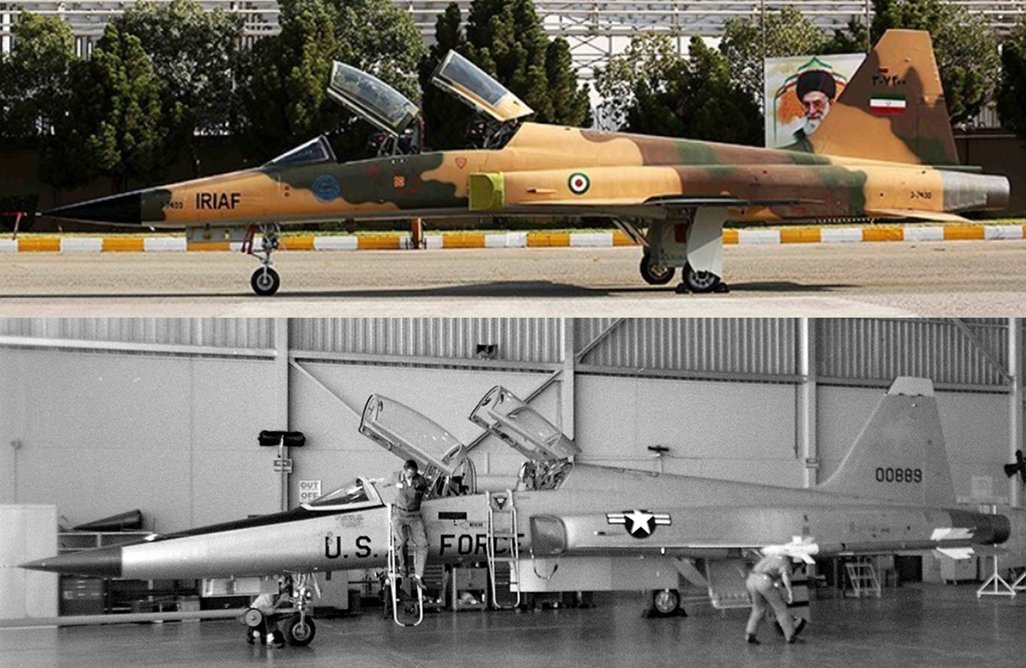 Even with massive upgrades imagined, such a jet would be no match for most modern air forces today.

But Iran’s tactic in announcing this new addition to its armaments is instructive of the general Muslim mindset when it comes to enemies who have superior forces. It turns to boasting and bluster as an attempt to plant doubt into the minds of those it considers its enemies in a ploy to dissuade them from mounting an attack which it rightly fears would bring overwhelming defeat. So, Iran’s President Rouhani declared, “Why does the US not attack us? Because it is aware of our power and the cost [that it will entail].”

Everyone recalls Saddam Hussein’s warnings to the Coalition Forces gathering before Desert Storm that if attacked Iraq would unleash the “mother of all battles” and inflict huge losses on its enemies.

His bluster was quite convincing to the military layman, backed up as it was with reports that Iraq had the world’s fourth largest standing army at the time. But after 42 days of aerial bombardment of Iraq’s military and civilian infrastructure, the ground offensive to defeat the Iraqi army lasted only 100 hours. It was indeed a massive display of “shock and awe” which all who witnessed, including the Muslim world, have not forgotten. So, while not wanting to go face to face with infidel armies, radical Muslim governments and insurgent groups shake their fists at the West and continue their bluster, hoping to cower a vastly superior enemy.

But there is another strategy as well, known among military thinkers as “asymmetric warfare,” and defined well by the Encyclopedia Britannica as:

unconventional strategies and tactics adopted by a force when the military capabilities of belligerent powers are not simply unequal but are so significantly different that they cannot make the same sorts of attacks on each other.

This includes things like guerilla warfare, and the many tactics of terrorism: assassinations, hijackings, kidnappings, suicide bombings, civilian attacks and so on.

Lt. Gen. H.R. McMaster astutely commented on this matter that “There are only two ways to fight the US: stupidly [conventionally] or asymmetrically.”

Because the Muslim world understands itself to be no match with the West today in a face-to-face war (despite Allah’s promises), and because it seeks to walk in the shoes of its prophet Muhammad who said, “War is deceit” (Bukhari, Vol. 4, Book 52, Hadith 268) and “I have been made victorious through terror [cast into the hearts of the enemy]” (Bukhari,  Vol. 4, Book 52, Hadith 220), the predominant warfare strategy of jihadis today is that of terrorism. Their hope is that this strategy will weaken both the resolve and resources of the infidel world, until that day when either the West collapses from within or the Muslim world has grown strong enough to challenge and defeat the West militarily.

Until that day, which all who love freedom hope never comes, Islamic terrorism will remain the primary strategy of the jihadi movement within Islam. In my opinion, “moderate Islam” offers no hope of ending this evil virus which lives deep in the heart of Allah, Muhammad and the Qur’an.