No Solus Christus for the PCUSA! 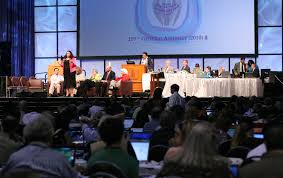 Good news!!! At this morning’s “ecumenical faith” worship service held during the Presbyterian Church’s 223rd General Assembly,  the opening leader was not a Muslim invoking an Islamic prayer (unlike at the 222nd GA in 2016 – see here for a critique of that event).

But, still, there is bad news. During the service, this written prayer was included in those offered by the attendees:

Reading this prayer carefully, one discovers that faith in Jesus Christ is just one of many diverse faiths on earth, all of which are good. God’s gift of grace is not linked uniquely to the work of Christ opening up salvation for all the world, but rather only one way of coming to God.

Apparently the Cross was not necessary to reconcile human beings to God. The mission of Jesus Christ was misguided. Why would God send His Son to die if His grace is dispensed to all people regardless of their belief systems and practices? Animists (the non-PC word for “practitioners of traditional religions”) whose lives are driven by currying the favor of angry spirits indwelling objects in their world; Buddhists who don’t believe in a supreme divinity but hope through reincarnation to attain nirvana and lose themselves in the monistic “Being” of all that is; Muslims who consciously and vehemently reject the person and work of Jesus as revealed in the New Testament and instead claim that Jesus is not the Son of God and did not die on the Cross, Jews likewise who reject the gospel and turn from their Messiah; all these (and what about Hindus, Taoists, Zoroastrians, Mormons and the like?) apparently celebrate the “goodness” of God, although Jesus himself declares that “…no one knows the Father except the Son and those  to whom the Son chooses to reveal Him” (Mt. 11:27).

All faith communities, according to this prayer, “act upon your [God’s] truth,” even though they reject Jesus’ claim to be THE Truth. Again, the New Testament tells us that no one has ever seen God (the Father), but that the Son, who is in the bosom of the Father, He has made Him known (John 1:18). “If you reject me,” Jesus says, “you reject the Father who sent me” (Lk 10:16). That Jesus equates himself with God’s Truth is clear in so much of his teaching. For example, in John 8:32, Jesus declares, “If you continue in my word, you are my disciples and you will know the truth, and the truth will set you free [from slavery to sin].” Four verses later (v. 36), in the context of the same conversation, he asserts, “So if the Son sets you free, you will be free indeed!” The truth sets free; the Son sets free; by clear implication, the truth=the Son.

But according to this PCUSA prayer, people of diverse faiths can reject the truth claims and teachings of Jesus and still act upon God’s truth. Now there is no question that elements of moral and spiritual truth can be found in all religions. But the issue is whether that truth points ultimately to Jesus or not, for as Peter said, “There is no other name under heaven given among men by which we can be saved” (Acts 4:12). The implication of this prayer is that the diverse faiths of the world are all gifts of God and equally able to teach saving truth that leads to God. If such is the case, Christ died to no avail, and the Great Commission is unnecessary at best, or religious imperialism at worst.

And finally, all faith communities are equally able to demonstrate God’s righteousness. Even though Isaiah would lament that “all our righteousness is as filthy rags” (64:6), and Paul, quoting the Old Testament, would say, “There is none who is righteous, no not one” (Romans 3:10), and a little later on in v.23, “All have sinned and fallen short of the glory of God, this prayer vetted by the PCUSA argues instead that God’s common grace poured out on all humanity ensures that people of any faith are able to demonstrate the righteousness of God. When Paul says of Jesus that God has made him  “…the source of your wisdom, righteousness, sanctification and redemption” (1 Cor 1:31), the apostle was hopelessly myopic. He should have seen that through any of the world’s religions people can demonstrate God’s righteousness. Romans 8:1 should really read, “There is therefore now no condemnation for those who believe in anything.” According to the PCUSA, apparently, Jesus is nice, but he is not essential to salvation, to a relationship with God, to understanding Truth.

It’s hardly a surprise, then, that this once-gospel-believing-and-preaching-and-sending denomination is imploding, having lost over half its membership in the last 26 years. Having debased the gospel into a social action movement, it has no incentive to reach a lost world with God’s good news. Instead, it reinvents “the gospel.” The world is not lost apart from Christ; in fact all believers of whatever stripe and creed are in fact part of the same happy family and despite all those silly, contradictory theological beliefs that pretend to separate us, so we can and must pull together to do the really important work of reversing global warming, decrying the nation-state of Israel, condemning “Islamophobia,” erasing national borders, redistributing wealth and dreaming up new genders. “In wonder and awe we praise you great God,” the GA worshipers intone breathlessly.

No wonder members are bailing out in record numbers. No wonder official PCUSA world missions work continues to dwindle, having been transformed from a gospel-planting work in former generations to a social justice and aid distributing agency today.

Am I making too big a deal over one prayer in a week’s worth of worship liturgies at the 223rd General Assembly? Perhaps. But the fact that such a prayer was vetted and chosen to be included in plenary worship indicates the mindset of the PCUSA leadership. That no one raised a concern strongly enough to strike this from the program would suggest acceptance of an anti-gospel, pro-universalistic approach toward the non-Christian world.

“Renewing the Vision: Kindom [sic] Building in the 21st Century” is the theme of this year’s Assembly. The play on the word “Kingdom” is intentional, as the denomination’s goal is no longer focused on following God as our King but on revering human beings around us as “kin.” These two shouldn’t be in opposition to each other, of course, but when the second replaces the first, the gospel loses its original meaning and purpose, and the Church can no longer sing: 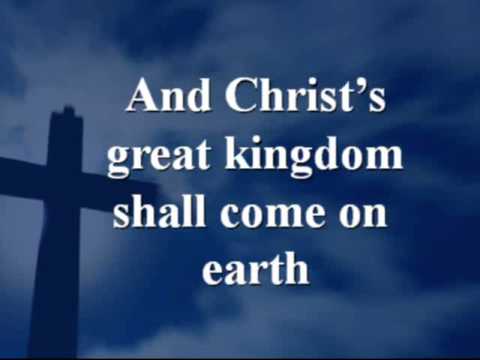 May Jesus Christ, head over the Church Universal, prevent the PCUSA from making a full shipwreck of its faith. Either that, or remove the denomination from the world stage. My heart yearns for the former, but not at the expense of the gospel.

12 Responses to No Solus Christus for the PCUSA!